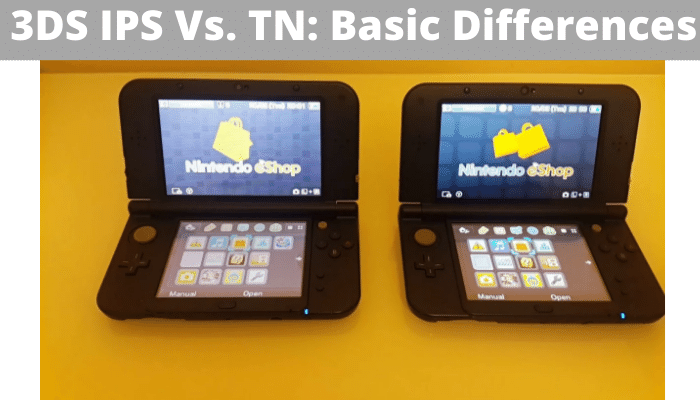 This guide put up a guide for the future 3DS IPS Vs. TN collector or enthusiast to use while looking for the system with the greatest screen now that it has reached the “Sunset” phase of its life cycle.

Sadly, the 3DS IPS (and its numerous variations) is inconsistent in terms of screen type and quality, unlike TN.

The majority of 3DSs have perfectly good TN-type LCD panels. These screens, nevertheless, have poor contrast and viewing angles, and their colors are more likely to be uneven.

Then there’s the chance that you’ll stumble onto a device with an IPS screen, which often has better contrast, viewing angle, and color.

The Activity Log application, which comes preinstalled on every Nintendo 3DS, will be used for the tests and comparisons that follow.

The system’s screen brightness will also be set to its maximum setting (level 5 auto brightness off), power-saving mode will not be activated, and any 3D functionality will be disabled.

Additionally, we shall just pay attention to the top screen. The majority of IPS screen systems will have a TN touchscreen.

The various display panels that Nintendo uses in its many 3DS models have been the subject of several discussions on this site, with some displays having a superior visual presentation to others. Since this question has been raised in several posts and one hasn’t yet been answered so, this post has an answer to this:

What do IPS or TN Displays mean?

Between the 3DS (and N3DS), Nintendo has employed TN and IPS display panels, which are two different varieties. Each has advantages of its own and operates somewhat differently.

The TN (Twisted Nematic) display, which has quicker pixel reaction times and is often less expensive to operate, is the one that is most frequently utilized.

Although this mostly depends on other aspects like the sorts of games being played, the 3D model, wifi settings, and screen brightness, it also drains somewhat less power, which should enable longer usage between charge cycles.

The biggest disadvantage is that TN screens don’t reproduce colors and contrast as well as they might.

When seen from severely tilted angles, one of the most obvious characteristics of a TN display is that the screen colors seem washed out or even reversed. This is why IPS displays are frequently preferred by gamers.

While color saturation and contrast are more brilliant than on TN equivalents, dark regions remain dark. The image on the screen is just as clear when seen at a wide-angle as it is when viewed at a 90o angle.

Higher power consumption, potential scan line effects, and a few milliseconds of pixel delay are the price for doing this.

However, these drawbacks should not be very noticeable because pixel delay only affects the time it takes for a pixel to completely change color rather than input lag. Even then, the difference in milliseconds is barely perceptible to the human eye.

What kind of display does my 3DS have, then?

You may use 3DSident by Joel16 to determine the display hardware version you have if you have a functional CFW or access to homebrew.

If not, there is another simple approach to verify, which is to just power on the 3DS and obliquely glance at the screens. Focus just on the top screen for consoles purchased prior to 2015 because all below screens would be TN.

Pay attention to both screens for consoles purchased in 2015 or after because some of them include dual-IPS displays. You most likely have a TN display if the colors start to alter and the dark areas start to seem brighter. It’s probably an IPS display if there aren’t many color shifts.

Has the 3DS had IPS?

Whether you have TN or IPS may be determined VERY quickly. Simply glance at the screen while tilting your 3DS left or right. It’s TN if you see the colors beginning to fade. If not, IPS are the cause.

So this is all from us about 3ds IPS vs. TN. Since most gamers won’t be using the 3DS at an extreme angle while playing games, whether or not it has an IPS or TN display shouldn’t be a big deal. It does have an impact on visual quality, but not significantly enough to break the game.

If the picture quality really is that important to you, Nintendo is OK with you returning your device and exchanging it with a new one as much as you’d like as long as it’s still covered by your warranty; hopefully, you’ll get an IPS model in return.