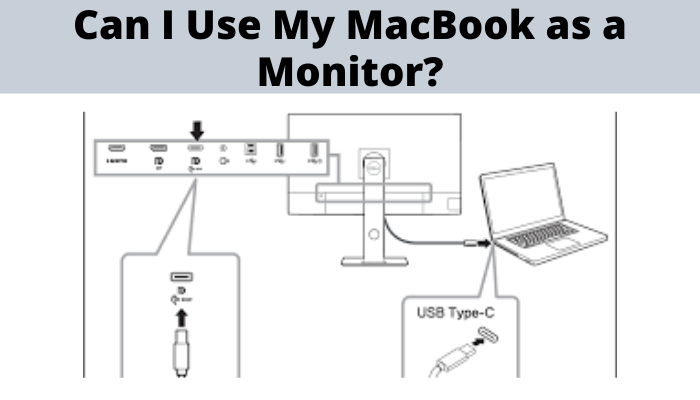 Are you unhappy with the size of the computer screen you’re using and searching for an answer to the query? Can I use my MacBook as a Monitor? Then you are at the right spot.

You may wish to use a MacBook as a monitor for a Windows PC because of its impressive display.

Use this tutorial to utilize your MacBook as a second monitor; it covers the fundamentals and shows you how to mirror or expand your display using a MacBook.

You may want to view the high-quality graphics or require the MacBook’s display to be on for another computer.

This article will show you whether or not you can use the MacBook as a Monitor and if the answer is yes, then how to utilize a MacBook as a PC monitor.

Is it Possible to Use a MacBook as a Monitor?

If you are finding the simple answer, it is a ‘No’ because MacBooks do not have HDMI input; hence they cannot be used as a monitor.

You may use third-party software or even a video capture device to turn your MacBook into a Monitor. In this post, we’ll go through some of the possibilities in further depth.

First and foremost, most MacBooks lack an HDMI port, with the exception of the Mac Mini, which features a single HDMI connector.

The MacBook has a bigger screen that can be used as an HDTV display with DVD and Blu-ray players.

It has a Target Display Mode capability that allows it to serve as a secondary display for other devices.

You can utilize your MacBook as an external monitor if you have both an iMac and a MacBook. In such a scenario, you can upgrade the display to a larger screen.

How Can I Use My MacBook as a Monitor?

If you wish to utilize your MacBook as a PC display, check sure both your iMac and your Windows PC have hardware support.

It is not possible to utilize the Retina 5K MacBook as a Target Display Mode screen. Follow the below steps if you want to use your MacBook as a Monitor:

You can transform your MacBook into a virtualized display with third-party software Such as Space Desk. This solution only allows you to utilize a MacBook as a monitor for other devices, not as the primary display.

Since these apps employ a local area network, no cables are required. A third party Software, on the other hand, necessitates the use of two devices, one to function as a host and the other to connect to the server.

With a Space Desk, here’s how to use a MacBook as a secondary display:

A video capture card is required if you wish to utilize your MacBook as a console monitor. There are several possibilities, but Mirabox 4K Capture Card is one of the best, according to the experts.

Video capture cards are primarily used to capture video from consoles onto a PC or Mac. It may also be used to broadcast console games using OBS.

How can a MacBook be used as a display for a new Mac?

To utilize a MacBook as a display for another Mac, you must enable Target Display Mode. All you’ll need is a Thunderbolt cable and a MacBook that supports TDM.

What exactly is Target Display Mode?

Apple introduced Target Display Mode, which is a relatively new feature that was initially only accessible on the 2009 MacBook.

It allowed customers to connect a suitable device to their iMac’s Mini Display connection and utilize the iMac’s display exclusively.

What really is Target Disk Mode?

Target Disk Mode is an earlier version of Target Display Mode that lets you utilize the hard disc of one Mac as an external drive on an older Mac.

What is the HDMI of the MacBook?

The MacBook’s HDMI connector is placed on the right side. Along with the Thunderbolt 4 connections, the HDMI port allows you to connect external monitors and screens.

That’s all there is from us if your query is Can I Use My MacBook as a Monitor. We hope this article has demonstrated how to manage the displays on a PC using a MacBook.

While you can’t use an HDMI cable to connect your MacBook to a display, you may utilize software or video capture cards to do it.

The MacBook may be used as a second display for Windows laptops with the help of a few third-party applications.

After reading this article, you’ll be able to utilize your iMac as a display for your PC or MacBook with ease. You may also learn some fundamentals about the Target Display Mode.

Don’t hesitate to get in touch with experts or professionals if you have any further questions regarding utilizing a MacBook as an external display.