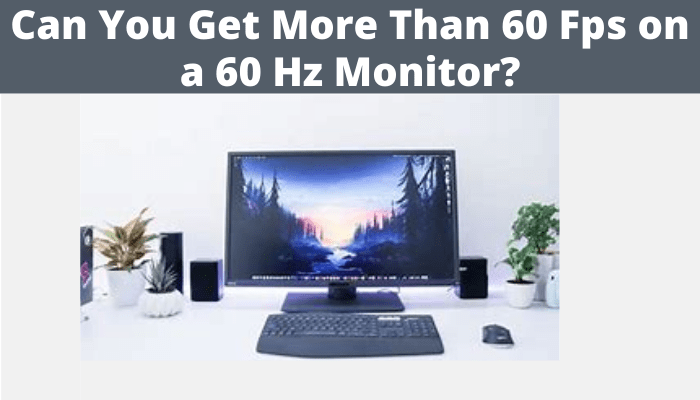 Though frame per second & refresh rates is two different concepts, they must eventually be combined to provide the highest potential PC performance.

Because the majority of PC users still use 60Hz displays, we’ll concentrate on things like 60Hz monitors and whether they can show higher FPS than 60 in this piece.

However, the same data may be used to various refresh rates such as 144Hz, 240Hz, and so on.

If the display doesn’t have enough refresh rates, no matter how powerful the GPU is or how many in-games FPS it can deliver, the extra FPS is useless.

With v-sync off, the input latency can be reduced by using a greater FPS than the refresh rate.

Often, PC builders opt for a high-end GPU and CPU that can deliver greater in-game FPS (such as 100-120 fps), but they choose displays that aren’t up to snuff.

This is a tremendous blunder. Suppose you have a GPU capable of 100 frames per second in 2K, for example.

You can choose a monitor with the closest refresh rate if there aren’t any displays with the exact same refresh rate. Going with 120Hz makes sense in this instance.

Before we go into detail on why gaining higher FPS than the refresh rate of the display doesn’t make much of a difference, we must first understand what they are:

Both the refresh rate and the frame rate are different:

The refresh rate of a display refers to how many times it can update its visuals in a second. So, a monitor having a 60Hz refresh rate could refresh the visuals 60 times in a second, just like that 144Hz could 144 times.

We all know that videos are nothing more than a collection of images that, when updated often, appear to be video to human eyes. All we see in games and films are faster-moving visuals.

As a result, the more pictures a display can refresh, the smoother the movie will be, and the more details we will be able to view.

The GPU or APU, on the other hand, produces frames per second. The GPU provides the output to the display after processing the graphics.

And the more powerful the GPU is, the more frames per second it can deliver at a given resolution.

You’ll need a monitor that can display those frames in this situation. FPS is the output of the GPU for the show, and each monitor has its own updating capability, which is referred to as the refresh rate.

If the refresh rate is too low, the GPU’s performance or frames per second may be capped. As a result, you should always use displays that can display the GPU’s full capabilities.

What Effect Does the Refresh Rate Have on FPS?

To comprehend this, we must first comprehend V-sync. V-sync, or vertical sync, is a technique that sends the GPU’s output into a buffer, allowing the display to provide smooth performance without tearing.

So, clearly, there are two scenarios, one with V-sync turned off and the other with it switched on; let’s go through each one and see when you can obtain those additional frames per second.

However, because input lag with your mouse is eliminated, playing at a greater frame rate than your monitor can show might still seem smoother.

What is the impact of 60Hz?

60Hz isn’t horrible, but it’s also not great; it’s just the norm. However, only proceed to 120Hz or 144Hz if your PC can handle the FPS. You’re wasting your time if you don’t.

Is it possible to reach 90 frames per second on a 60Hz monitor?

Yes, the monitor will still show 60 fps, but the game will feel smoother to manage. To avoid screen tearing, make sure Fast sync is enabled in NVidia settings.

Only if the GPU can also deliver more FPS can a 60Hz monitor give FPS up to 60 FPS, not more than the refresh rate. As a result, a monitor’s FPS is limited by its refresh rate.