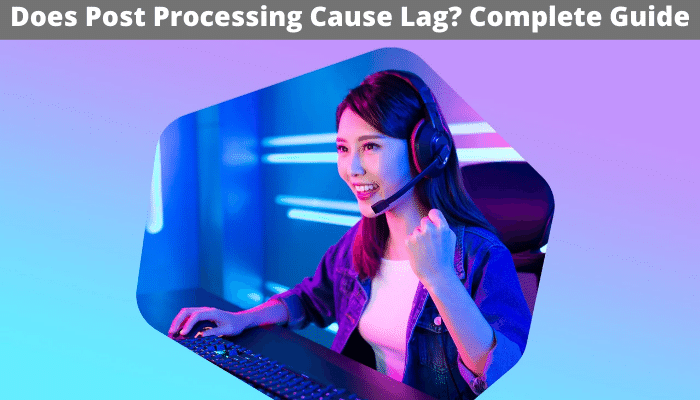 A game’s success depends just as much on how well the color tones and lighting are set as on the gameplay itself. Post-processing also contributes to the overall enjoyment of the game. Stunning graphics will persuade users to purchase the game.

The aesthetics of the game may be changed through post-processing to provide useful screen effects. This enhances the game’s visuals and gives the graphics a more realistic and colorful quality. So keep on reading to know does post-processing causes lag.

Images in a game undergo post-processing to add filters and effects. It is applied after shading, which means that once a game renders the graphics, the original image is enhanced in a separate rendering process before being given to the viewer, allowing effects and filters to be added directly to it.

Post-processing polishes the renderings, improving the aesthetics of the game and even altering the atmosphere of the scenario.

Post-processing enables visuals, whether they are realistic or cartoon, to realize their full potential. In general, post-processing improves a game’s visuals.

After a game’s rendering is finished, post-processing is done to enhance the visual quality overall. When set at its highest level, it has a very significant influence on FPS but, in comparison to lower settings, has a relatively small impact on the graphics.

The post-processing level is frequently kept on low, with medium also being an option. Compared to a higher level, a lower post-processing option offers greater FPS with relatively little sacrifice to the graphical quality.

Unfortunately, changing the settings of the post-processing parameter has an all-or-nothing influence on the visual effects stated above.

In order to bring their inventions to life, game developers work hard to provide aesthetically amazing graphics. Developers may do this using a variety of techniques classified under post-processing. Starting with SSR and concluding with Grain, these effects are used in a certain order:

Why does input lag occur?

When the TV is processing images so quickly that it takes too long for a player’s physical input (on a controller for a video game) to appear on screen, this is known as input lag. In other words, Mario leaps after you command him to jump by pushing a button on your controller a little time afterward.

Post-processing effects: What do they entail?

The most useful parameter in that regard is post-processing, although contrary to popular belief, it has no perceptible impact on the game. The aforementioned photographs demonstrate the sporadic advantages of a higher post-processing setting. The finishing details that heighten realism are where you’ll primarily notice it.

So this is all from us; if you are seeking, does post-processing cause lag? Post-processing describes all the additional steps taken to improve the visuals of a game after its first render. Since this tutorial focuses on frames, it is best to disable the majority of post-processing features, including Nvidia hair, dynamic or interactive smoke, depth of field, and more.