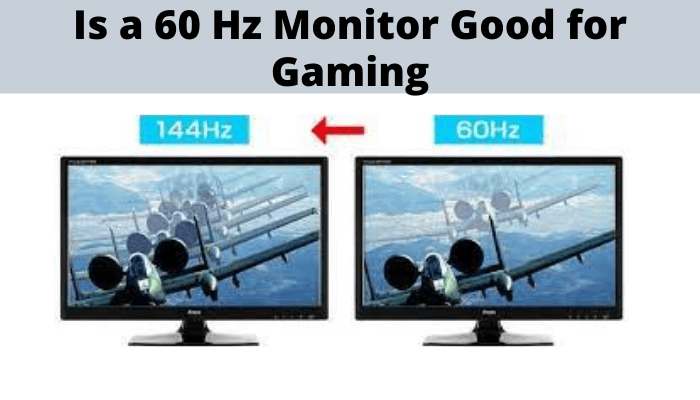 Is a 60 Hz Monitor good for gaming? This age-old topic still haunts several potential monitor buyers today. 60Hz was formerly thought to be the gold standard for displays.

Even now, many people’s gaming systems include a 60Hz monitor. Is that, however, sufficient, or should you upgrade to a monitor with a greater refresh rate?

We conducted some research, inquired around, and compiled expert knowledge to provide you with the most accurate answer to this query.

By the conclusion of this post, you’ll be confident to determine whether or not a 6o Hz monitor is the best gaming monitor for you.

What exactly is the Refresh Rate?

It’s crucial to understand the refresh rate before diving into why a 60 Hz display is or isn’t ideal for gaming.

It’s probable that some of the people reading this are already familiar with the term “refresh rate” or how it works. The refresh rate is the frequency of time the screen refreshes the display each second.

While refresh rate and frames per second are not quite the same things, they are extremely closely related.

Even if your system can output 100FPS in a game and you have a 60 Hz display, you’ll only see 60 frames a second since the monitor only refreshes 60 times within this time period.

If you have a system that supports 30 frames per second but a 60 Hz monitor, you’ll only see 30 frames a second, which results in less visual clarity than 60FPS.

In other words, both your monitor and your hardware restrict the frames per second you view, with the minimum threshold among the two being whatever you see on-screen.

In this way, it’s similar to the idea of a GPU or CPU bottleneck. A higher refresh rate display seems smoother as a result, as far as your equipment can accelerate the frames to meet it.

What are the benefits of 60 hertz?

60 Hz monitors have only one benefit over their higher refresh rate counterparts: they are often less expensive. A 144 Hz display is objectively superior to a 60 Hz monitor; however, it is more expensive.

There are no benefits to having a monitor featuring a lower refresh rate other than expense.

Is a 60 Hz Monitor Good for Gaming?

Now let’s get back to the original question. Is 60 Hz beneficial for gaming, or if it isn’t superior to a higher refresh rate in any manner other than cost?

60 Hz and 60FPS are absolutely playable in professionals’ opinion, especially in certain sorts of games.

A 60Hz display is perfect for any game that is mostly single-player or simply non-competitive.

Faster refresh rates have the major benefit of increased accuracy, which is perfect for shooters as well as other challenging games.

If your system can support 144FPS, you should get a faster display to make use of the extra frames.

60 Hz is OK, but if you’ve already invested in a high-end CPU and graphics card, settling for anything less is a waste of money.

The additional money is well worth it if you want to enjoy a time of better refresh rates.

Props to you if you’re a console enthusiast who prefers a better gaming display than a TV screen.

You’ll profit from the reduced input latency and faster response times, and you’ll probably regularly defeat your buddies or lead the team.

60 Hz is without a doubt the gold standard on consoles. The PS4 and Xbox One are all limited to 60 frames per second.

If you have one of them, we strongly suggest you go with a 60 Hz display rather than a higher refresh rate monitor.

Several games could only be playable at 120FPS, so if you’re one of the fortunate few who grabbed an Xbox Series S, Xbox One S, or PlayStation 5, check to see whether the games you play are available in frame rates higher than 60FPS on your system.

What is the ideal refresh rate? Is 60 Hz is fine?

The vast majority of gamers consider 144 Hz to be the gold standard in gaming. 240 Hz displays are gradually getting more inexpensive; however, the cheapest ones still cost approximately $260.

360 Hz displays are still prohibitively costly, and they provide little, if any, a perceptible advantage over 240 Hz.

Smoothness improves with each step higher; 240 Hz is slightly better than 144 Hz, but only slightly, but 144 Hz is substantially faster than 60 Hz.

144 Hz is now the best spot for affordability and efficiency. Even high-end 144 Hz displays cost less than $200, with name-brand monitors costing as little as $160.

If you choose a higher refresh rate, like 240 Hz, you will see that it is slightly faster than 144 Hz, but not significantly.

You’ll be fine with 60 Hz when you’re on a limited budget and also don’t plan to replace your gear for a long time.

It was regarded as good until a few years ago. Because standards continually grow over time, 144 Hz may become obsolete in ten years.

What kind of player might benefit from a 60Hz monitor?

Is a display with a 60Hz refresh rate acceptable?

A 60Hz display is ideal for gaming, and a large number of people use 60 HZ Monitors.

So this is all from us if you are finding an answer to the question Is 60 Hz Monitor good for gaming?

A 60 Hz gaming monitor is ideal for casual, story-driven games or players on a budget in general. A monitor with a refresh rate of 60 Hz will nevertheless produce a smooth, reliable image.

On panels with refresh rates greater than 60 Hz, fast-paced games such as racing and first-person shooter games would run better.