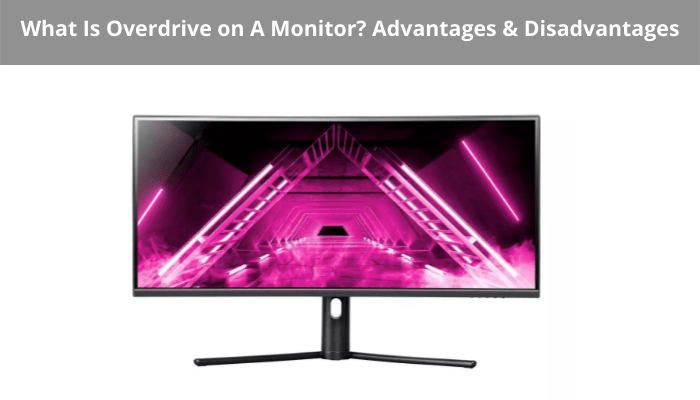 Are you having problems with ghosting on your monitor? Are you sick of it or looking for new ways to get rid of it?

If you answered yes, you should be familiar of What Is Overdrive on A Monitor, since it is one of the characteristics that can help you eliminate ghosting.

If you’ve ever seen blurs when playing fast-paced games, that’s ghosting and it’s something you’ll need to deal with response time overdrive.

In addition, response time is one of the aspects that contributes to the occurrence and removal of ghosting. Keep on reading to know more about what is Overdrive on a Monitor?

What exactly is overdrive?

Overdrive is a function found on a lot of gaming monitors. Overdrive is an image-enhancing technique that essentially speeds up the pace at which your monitor’s pixels may change color, resulting in a more realistic cinematic experience.

While overdrive technology is beneficial to displays, it is sometimes neglected owing to the practical nature of its functioning.

While this is true, understanding what overdrive is on a monitor and how it impacts your overall gaming experience are two important factors to consider when purchasing a new display.

Overdrive, as previously mentioned, is a technological function of a display that allows it to effectively increase the rate at which the pixels change color, often using the GTG scale.

The pace at which pixels change color is referred to as response time. It’s one of the monitor’s strongest selling features, and it has a significant influence on the visual/gaming experience you get.

The problem with reaction time is that monitor manufacturer do not always provide an accurate assessment of a monitor’s response time.

Instead, they will disclose the “best-case scenario” to make the display appear more powerful. These ‘best case scenario’ specs are frequently distorted by overdrive.

What Is Overdrive on A Monitor?

OD is a feature that allows a gamer to adjust the monitor’s reaction time on the fly in order to avoid image lagging.

If you wish to compete against other competitive gamers, make sure your gaming monitor’s overdrive menu settings are adjusted.

If your eyes continue to trouble you despite improved graphics, try investing in the finest eye care monitor to reduce eye strain.

LCD displays use extremely small crystals that move across the screen. When the crystals are subjected to high voltage, they enable light to pass through.

As a consequence, the color will appear on your monitor. Because of the increased voltage applied to the crystals when the overdrive setting is engaged, the crystals will move quicker.

Furthermore, the colors of the LCD pixel will vary in color at a quicker pace, which is known as overvolting.

Overdrive on a monitor works in the same way to increase the display’s reaction time.

How to Modify Overdrive Settings:

Each monitor maker has its own method of developing the internal settings. In practice, the overdrive settings vary depending on the type of gaming monitor.

However, you should preferably access the monitor’s overdrive settings by entering the On-Screen Display menu, which has the overdrive option.

Finally, on certain ASUS displays, the menu is referred to as OD, Response Time, or TraceFree. Some displays only have three brightness settings: low, moderate, and high.

In certain circumstances, overdrive modes with mild, medium, and strong levels are available, as well as a scale with levels 0 – 100 in intervals of 20.

Additional display overdrive choices include slow, regular, and faster. As a gamer, you could be curious about what to place for monitor resizing widescreen for games.

Advantages and disadvantages of monitor overdrive:

So far, we’ve simply discussed how overdrive impacts the pixel performance of your display. Despite the fact that overdrive appears to be a win-win technique, it is important noting some of the drawbacks associated with its use.

The following are the primary aspects and benefits of monitor overdrive:

Despite a few artifacts introduced by overdrive, the positives clearly outweigh the drawbacks. However, if you don’t adjust a monitor’s overdrive setting, you’ll frequently find that the visual performance is really bad.

Where is overdrive on a monitor?

Overdrive is a function available in the OSD of your display. When accessing your monitor’s menu, you’ll frequently see a ‘performance’ or ‘gaming’ area that has options like overdrive, overclocked, gameplay modes, and much more.

Overdrive may be named differently depending on the monitor brand you possess, with some manufacturers choosing a unique naming system.

Regardless of the nomenclature structure, all overdrive capabilities enhance pixel response time in the same way.

One of the most common questions we hear about overdrive is, is higher overdrive better?

While greater degrees of overdrive are helpful in terms of pixel reaction time, they are sometimes accompanied by a slew of vexing screen abnormalities such as overshoot.

When it comes to monitors that don’t have dynamic overdrive, you have to figure out what setting works best for you.

What exactly is overshoot?

Overshoot is a visual artifact caused by the use of an overdrive in a contemporary LCD monitor.

Overshoot seems similar to blurring or ghosting, except that the trail is generally white, making it appear more like a highlight than a smear.

Is input latency caused by overdrive?

There will be no input latency if you enable the overdrive feature and choose a mode. If you use low overdrive levels, though, you may see a ghosting effect.

What exactly is ghosting?

The phrase “monitor ghosting” refers to the blurring pictures that show on your LCD monitor. When you play a fast-paced game, or your display has a sluggish reaction time, you may notice ghosting.

Is overdrive harmful to the display?

Inverse ghosting might occur if your gaming display has too much overdrive. Your screen will show a shadow with opposing hues if this happens.

So this article explains your query, what is overdrive on a Monitor? That all depends on the quality, it gives to each given monitor. While uncommon, certain overdrive settings begin so harshly that overshoot is visible even in its most basic form.

We strongly advocate using the overdrive option on these displays. It will not only improve your visual experience but will also provide you a competitive advantage while playing esports titles in which every millisecond matters.